The island of ‘Pulau Buru’ is not a place you would at first glance, associate with logging.  The coastal road extends along the northern coast, meandering through sleepy villages, coconut palms and along deserted  beaches.  Behind the coastal strip, the landscape is one of rolling hills covered in alang alang grasslands interspersed with patches of low forest set against a backdrop of forest clad mountains.  And to the right, always the deep blue sea stretching to the horizon. 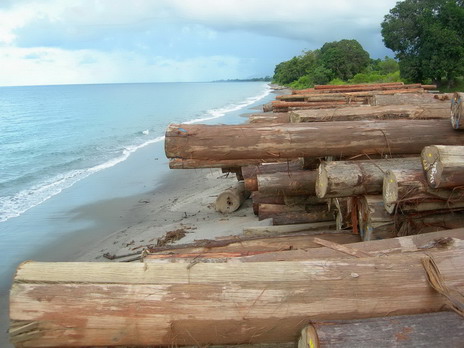 The geology is a rugged complex of uplifted sedimentary shists and degraded limestones around a central volcanic heartland.  The overlying soils are deep, very fertile, and easily eroded.  Pioneer species including Red Jabon and an endemic Red Meranti dominate and give the forest a resilience that ensures rapid recovery after logging disturbance.

PT Gema Hutani Lestari, a 148,450 hectare concession straddles the rugged topography of the island with two separate blocks.  The blocks are separated by extensive protection forest which includes a crater lake.  This is the traditional homeland of an ethnically distinct indigenous population of shifting cultivators which, until very recently, has been living in isolation from the outside world. 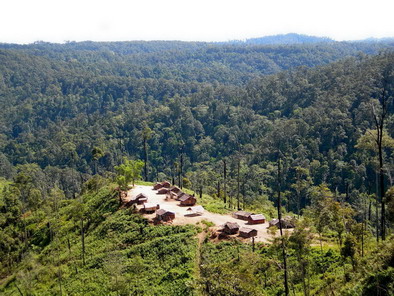 The GHL concession license was issued in 1999 and extends for 55 years.  However, logging over most of the concession occurred as early as 30+ years ago under the license held by PT Gema Sanubari.  Little evidence of this early logging is visible as GHL implements the second cutting cycle.

TFFs engagement started with a memorandum of understanding (MoU)  in early 2005, which defined the scope of a reduced impact logging (RIL) training program.  The magnitude of the challenges, were recognized from the beginning.  The ruggedness of the terrain and the highly erodible nature of the soils were seen as serious constraints on the possibility of  reducing the physical impact.  The industrial demand for high quality logs constrained utilization policy.  And the remoteness of  the location served as a disincentive for the recruitment and retention of adequate qualified staff.

Improvements were gradually realized and in July 2010, the company joined The Borneo Initaitive (TBI) certification facility under the technical guidance of TFF.  The magnitude of challenges facing the company expanded to include dealing with the complex social issues of clan ownership which, on Pulau Buru , is remarkably similar to that found in Indonesias Papua provinces or in Papua New Guinea.

Perseverance finally paid off when on November 20, 2013, the Woodmark Soil Association announce the awarding of an FSC certificate for sustainable forest management had been awarded to GHL.  However, the certification has caveats.  A large number of  minor corrective action requests (CARs) served notice that improvements were still necessary  in many aspects of the company’s operations.

GHL has retained TFF to continue providing technical guidance and inputs to help the company address its outstanding CARs within the timeline provided under the certification.  Perseverance will remain the watchword for some time to come.