Location
To reach the PT Sari Bumi Kusuma (SBK) concession, one must cross the province of West Kalimantan to the small town of Nanga Pinoh.  From here the road becomes more torturous as it wanders through the ex-Inhutani III lands which are rapidly being taken over by local settlers.  The last stretch of the journey is along the company corridor road across the vast alang alang grasslands which extend almost to the border of Central Kalimantan.

SBK-Seruyan is a  147,600 ha frontier concession whose intensively  managed forests form  a stark contrast to the vast area of adjacent deforestation that is the legacy of  a long history of shifting cultivation and repeated fires.

A Short History
Logging in the SBK concession started in 1980 under a 20 year concession license.  SBK was quick to establish its leadership role in the Indonesian forestry community by welcoming collaboration with researchers from various forest faculties in Indonesia to carry out a wide range of research and investigations within the concession area. 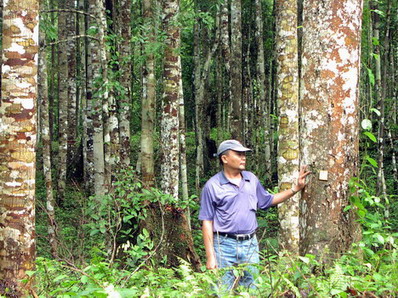 In 1990, SBK began a collaboration with the USAID funded, Natural Resource Management Project which was to last 10 years.  One of the more durable outputs of this collaboration, has been the adoption of a reduced impact logging strategy for the entire concession.

Initial trials in 1995/96 designed to evaluate the impact and the benefits of RIL, lead to a corporate decision a few years later, to adopt RIL for the entire concession. In 2000, TFF added its support to SBK’s efforts to adopt all aspects of RIL.    This stimulus culminated in SBK’s participation in the TFF “Forest-Market Linking” pilot project and the achievement of the “RIL Verified” mark in 2003, and ultimately to the  achievement of FSC certification under continued TFF mentorship.

In 1998, in response to a Ministry of Forestry initiative, SBK was one of two concessions which agreed to implement the experimental Tebang Pilih Tanam Jalur (TPTJ) silvicultural system and was granted a 70 year licenses as an assurance for security of tenure.  Since then research efforts have intensified, particularly with respect to the intensive management of the planted stock within the natural forest setting.

SBK is unquestionably a leader in the implementation of selective logging and enrichment planting. One of the motivating factors in designing this system, was the perception that the effective monitoring of this system should be possible using remote sensing techniques.  Another rationale for the systematic strip planting after logging, related to the perception that local communities would be more likely to respect these areas since the act of planting has a strong connotation of ownership. 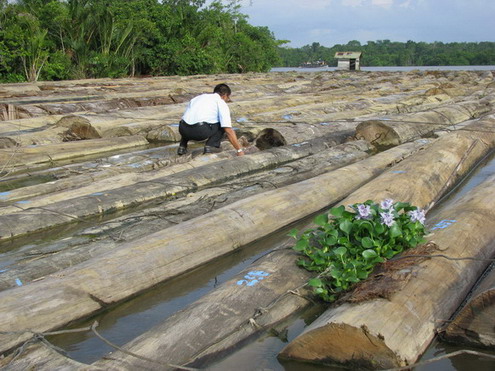 To ensure the best results for its efforts, SBK has been actively seeking to select seed stock from superior quality trees.  To date, more than 500 such trees have been selected throughout the concession.  The area around these trees is kept free of competing vegetation and is used as a source for the collection of wildlings which are then reared in the nursery to the right size for planting out.

It has long been known that different species grow at different rates, SBK working with university researchers have conducted species trials as part of the TPTJ program.  Based on these trials, five locally common species have been chosen to be the core species for the TPTJ planting program.

Certification and Market Benefits
SBK operates an integrated industrial complex in Pontianak consisting of a plywood mill, a sawmill and a moulding industry.  Pak Hadianto, the marketing manager for solid wood products, admits to “…significant premiums for Bankirai products” as the main market incentive for the use of the FSC label.

However, it’s a different story for plywood products which offer little room for premium pricing.  While premiums for plywood in the main market, Japan, are very small to non-existent, it is interesting to note that some of  SBK’s Japanese buyers are requesting the FSC label, perhaps an indicator of things to come.